We quiz the key management team about some of their memories, challenges and keeping pace with the changing toy industry.

It’s undeniable that the Toymaster May Show is one of the highlights of the toy industry calendar. The invitation to participate goes out to suppliers straight after the Christmas and New Year break, and normally the show is sold out by the second week in January.

Crucially, while pretty much everyone in the toy industry has a story from one of the themed party nights, it is a business first show – independent retailers go there to buy and order books usually come away bulging after the three days.

This year, there’s an extra bit of frisson around the event – which takes place from May 21-23 at The Majestic Hotel in Harrogate – as 2019 marks the 30th anniversary of the buying group.

To celebrate, we asked the management team – md Ian Edmunds, operations director Yogi Parmar, product selector Paul Reader and retail manager Brian McLaughlin – for their memories from their time at Toymaster and some of the changes they’ve seen over the years.

“Our members each have to deal with their own local competitive environment which is constantly changing,” says Ian. “At Toymaster, we have to adapt how we support and communicate with our members to meet their individual requirements. The biggest challenge is without doubt uncertainty, and Brexit has been a big factor in this as it impacts on how our members plan forward.”

Ian admits that the competitive environment is very different these days compared to ten or 20 years ago, when the likes of Woolworths and Toys R Us were major players.

“Now they have gone but you have a raft of new entrants, particularly the discounters, who have taken their place,” he says. “The high street is also going through a transformation with traditional retail shops closing and being replaced by different types of outlets, such as coffee shops.

“There has also been a lot of consolidation in the supplier base, there are a lot fewer now than there used to be.”

If you’re heading to Harrogate later this month for the first time, be prepared for three days of deals, networking with like-minded people and really feeling like you’re truly at the heart of the independent toy trade.

To read the full feature in the latest edition of Progressive Preschool, simply click on this link. 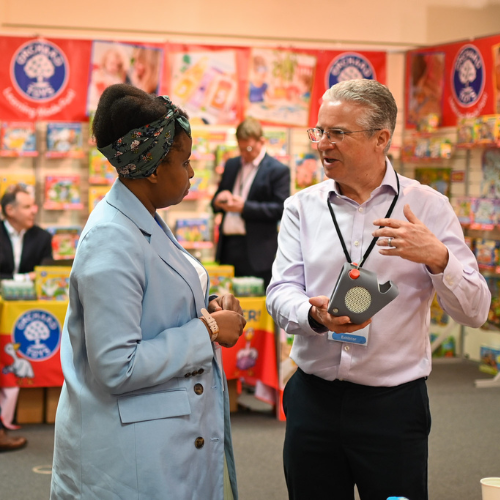